Josh Scigala, CEO at Vaultoro: briefly about history and prospects of money and cryptocurrency 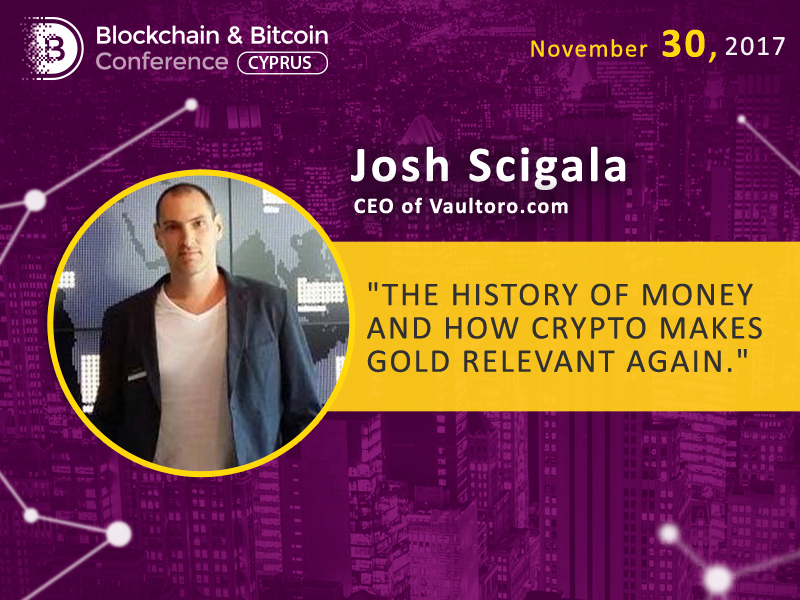 Many people believe that bitcoin will replace all kinds of cash and bank cards in the near future. Besides, taking into account the rapid development of digital assets, such a suggestion is quite reasonable. Can cryptocurrency be referred to as an alternative to the modern financial system? Why is it equated with gold, and is such a comparison justified?

These questions will be answered by Josh Scigala, CEO at Vaultoro, who will speak at Blockchain & Bitcoin Conference Cyprus on November 30.

The speaker permanently participates in global conferences and lectures, making educational presentations on bitcoin and cryptocurrency in general. At Blockchain & Bitcoin Conference, Josh Scigala will talk about the history and evolution of money. He will focus on development trends of cryptocurrencies, analyze its prospects and explain why digital currency is equal to gold now.

Josh Scigala is a designer, animator & entrepreneur. He has cofounded 5 technology startups. Initially training as a designer and special effects director, Josh provided engineering and design services for the biggest show brands in the world, such as The Big Bang Theory, 24 & Australian Idol.

Josh has joined the cryptocurrency industry because of his interest in theory of the Austrian school of economics as well as understanding of Keynesian economics. Currently, Josh Scigala is fully engaged in developing his own project called Vaultoro.com.

Register to Blockchain & Bitcoin Conference Cyprus and do not miss Josh Scigala’s presentation!